First acquired through the Homestead Act during the late 1800's, the Colorado Cabin Adventures property originally encompassed lush meadows along the North Fork of the Grand (later Colorado) River. Elmer Harsh, the son of a famous inventor and member of the Colorado Territorial Legislature, purchased the property in 1914. Active and athletic himself, Elmer envisioned an outdoor sports retreat and built a string of small log cabins for rent along the south side of the river on property which is today known as Colorado Cabin Adventures at Grand Lake. In 1929, when the state began constructing Highway 34 from Estes Park to Grand Lake, the new thoroughfare brought tourists in their early automobile

After Elmer Harsh gave his nine (9) year old son, Jim, his first set of wooden skis in 1918 and taught the lad to ski on the nearby slopes, Jim became one of Colorado's first Olympic Team members and participated in the 1932 Olympic Games. Later, as chairman of the Annual Grand Lake Winter Sports Week, Jim actively worked to fulfill his father's dream of helping to develop Colorado's outdoor sporting opportunities. Always the adventure-seeker, Jim was still skiing well into his nineties. The newly renovated and newly named Colorado Cabin Adventures property and cabin rental operation remains loyal to Elmer Harsh's original vision of 90 years ago...a beautiful setting for guests to enjoy the nature and adventure found amongst the rivers, lakes and mountains around Grand Lake. 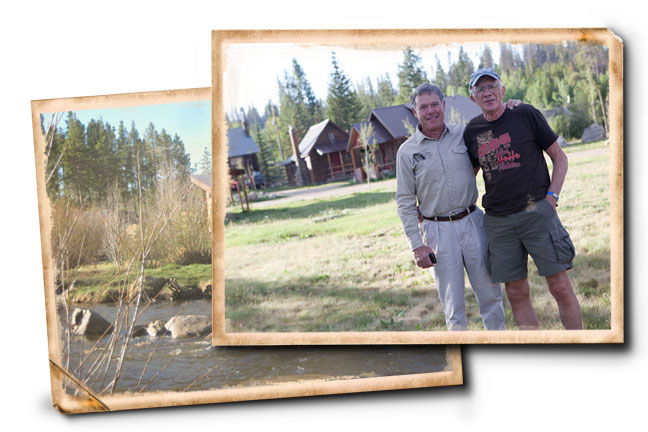 For the Real Colorado Experience

This beautiful, quaint old town feels like you’ve stepped back in time. With a backdrop of snowy mountains and a lake of blue, Grand Lake offers fun for all ages.

Which of our 13 comfortably rustic cabin units is the best fit for you? Newly renovated with full amenities, each cabin has its own unique character.